What are the encoders i can use for live

Disclaimer: We do not advertise, distribute nor endorse the following Softwares. This is merely a guide

butt (broadcast using this tool) is an easy to use, multi OS streaming tool.
It supports SHOUTcast and Icecast and runs on Linux, Mac OS X and Windows.
The main purpose of butt is to stream live audio data from your computers Mic or Line input
to an Shoutcast or Icecast server. Recording is also possible.
It is NOT intended to be a server by itself or automatically stream a set of audio files.

What is AltaCast? It started as a continuation of the Oddcast/Edcast streaming software that can stream to either Icecast or SHOUTcast servers.

The current version of AltaCast Standalone, Winamp and Foobar plugins is 1.0. A 2.0 version is planned for the future that will be SHOUTcast v2 compatible. For a list of features, see the AltaCast page. 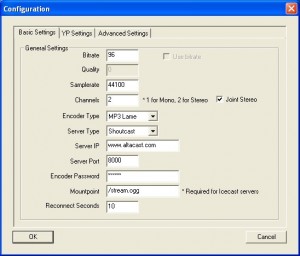 Edcast (previously known as oddcast – which has no affiliation or relation to the software “Oddcast” made by “Oddcast Inc.”) is a broadcasting application targeted to the small station owner. There are three different flavors of Edcast: a Winamp plugin, a Foobar plugin, and a standalone broadcaster.

How to get free trial

We have to change the procedure on how to use our free trial service to make it more user...

Immediately after logging in, you will be presented with the dashboard view...

How to GET SSL Stream URL/Link?

We have streamlined the request for SSL stream link by enabling an addon for each service that...

How do i change my centova cast server admin or login password ?

To change your password for your centova cast server.   Login to billing at...